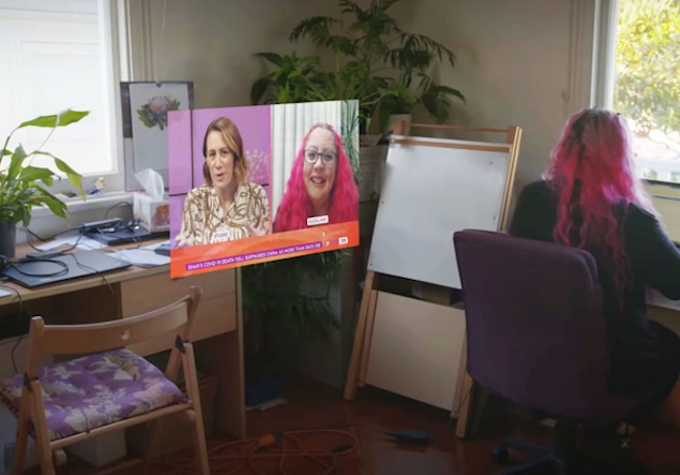 Why did the criticism of a small fee spent on a single mini-documentary made two years ago suddenly pop up in the news on two national networks this week — and then disappear?

“I’m so sick of everything that brings in taxpayers’ money for these projects. Why can’t people just pay out of pocket? Jason Walls, Newstalk ZB’s deputy political editor, asked last Tuesday.

“I keep seeing these things crop up time and time again, when we have overwhelmed hospitals. Twenty grand ain’t tons of money in the grand scheme of things, [but] this stuff just keeps piling up,” he added, noting the latest Chef series broadcast and screened without exhausting public funds.

More public money than ever is being spent on media content these days – and spending deserves careful scrutiny.

But the one project that sparked her concern this week wasn’t expensive — or particularly worthwhile.

Siouxsie and the virus is a short online video shot in March 2020 and it has been online for almost two years now, with its public funding sources noted at the end. It photographs the life of Dr Siouxsie Wiles in ‘flying over the wall’ style as New Zealand entered Tier 4 lockdown.

It was made for the online platform Loading Docs which describes itself as “a launching pad for New Zealand short documentaries”.

Walls’ objections were hastily aired as an online report by Newstalk ZB and its sister newspaper The New Zealand Herald. The stories were shared on social media with the claim “the amount spent left some speechless”.

“Would you pay $20,000 for a documentary about ‘science superhero’ Dr. Siouxsie Wiles? ‘Cause you’ve already done it.” HeraldThe story of has begun.

On air, Walls had referenced $20,000 in funding from the Film Commission, but said he didn’t know how. Siouxsie and the virus had been funded.

It turned out that this sum is related to a different project that has not yet been realized.

The funding model requires filmmakers to raise further funds themselves through crowdfunding.

Boosted by the herald
Ironically, the mini-doco was also boosted by The New Zealand Herald back in 2020.

“It was launched in partnership with The New Zealand Herald on their platform, as well as a high-profile story in [Weekend Herald supplement] Cloth. It then went to our platform, TVNZ On Demand, RNZ, PlayStuff and The spin-off. It got over 200,000 views and it was so loved by the audience,” Parnell said. Media monitoring.

Initially, the director, Gwen Isaac, was funded to make a completely different film about a Kiwi MMA fighter in Japan.

“When the covid lockdown came we had to pivot and find something else. The director was able to get this access (to Dr. Wiles) in the week before covid. It was a moment that changed society and we were able to capture it. I’m very proud of that,” Parnell said. Mediawatch.

“Loading Docs has a platform-agnostic approach which means more New Zealanders can connect with our work and the work of our documentary makers,” she said.

On social media, Dr Wiles pointed out on Thursday that she won nothing with the mini-doco and that $20,000 would have cost every New Zealander about half a cent.

She also pointed to NZME – the owner of Newstalk ZB and the herald — received $9 million in covid wage subsidies in 2020, which would have taken $2.25 out of each Kiwi’s pocket.

LOL Just found out how much taxpayer money NZME, owner of the NZ Herald and Newstalk ZB, got in the first half of 2020. $8.6 MILLION! If you are a taxpayer, you paid $2.23. Oh, and their after-tax net profits increased by $1 million to $7.8 million. https://t.co/pq6WhvnXyO pic.twitter.com/kOxQk0v5yM

Wage subsidies repaid
Some media companies, including Stuff and The spin-off – repaid the wage subsidies received that year when activity subsequently stabilized.

NZME failed to do so, even after increasing profits and revenues in 2021.

NZME CEO Michael Boggs said Media monitoring in April they used the wage subsidy for the intended purpose of retaining jobs and the NZME turned down the second tranche of wage subsidy when offered.

Dr. Wiles’ observations would have been relevant additions to The Herald and ZB’s online reports highlighting the Film Commission’s “mind-boggling” funding decision, but by then anyone looking for it would only find that those stories were no longer online.

The HeraldThe link generates an error message that says, “Oops, looks like a dead end.”

Stories have been erased from the herald and ZB social media feeds without explanation.

Thanks @MediawatchNZ for reviewing the dangerous jab Newstalk ZB and NZ Herald made on me last week. There was never any question of asking questions about the use of taxpayers’ money. I sincerely believe it was to stir up outrage, to attack the arts, to undermine and hurt me. https://t.co/SdwWwF90z1

First question about funding
Parnell of Loading Docs said it was the first time the funding for a production had been questioned in the media.

But this isn’t the first time ZB’s Walls has criticized public spending on media content.

Last year he called a range of art projects funded by covid recovery funds “an assortment of abject rubbish” under the title: Not a single penny more for podcasts, poetry and books of images in the name of “covid recovery”. He wrote:

“It’s easy to target Creative NZ funding and poke holes in what the government has decided to fund through its $55m Public Interest Journalism Fund.”

Last year, the NZME secured up to $2,995,702 from the PIJF to employ 15 journalists ‘to fill in the gaps in court reporting’ in 11 of its publications – as well as two national reporting roles.

In 2020 — the year Siouxsie and the virus was made – the PIJF awarded up to $200,280 to NZME for “a kaupapa publisher and an audio innovation publisher to improve access to news for blind and visually impaired New Zealanders”.

More funding
An interactive NZME project exploring “how and when land became part of the Pākehā property system in Aotearoa New Zealand” has secured an additional $80,500.

And just this month, the PIJF fund announced $255,000 of taxpayers’ money for a Herald series called Untangling Anxiety.

This is based on a series of videos for the herald‘s website showing how people from different cultural backgrounds coped with anxiety disorders during the covid-19 shutdowns and after.

It’s the kind of idea you might expect to find on a platform like Loading Docs, but so far the herald and ZB have expressed no opinion on whether this unduly drains money from the public purse at a time of stress in our hospitals.

This article is republished under a community partnership agreement with RNZ.