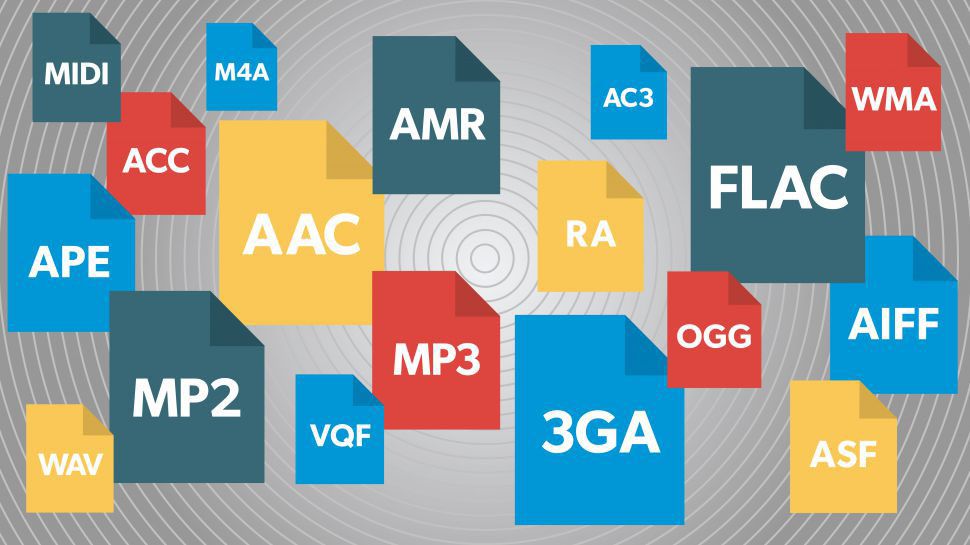 As you organize your digital music collection, you might be struck by the number of different audio file formats in your library. Almost everyone has heard of MP3, but what about OGG, AIFF, MQA or DSD?

If the list leaves you wondering if all of these songs were studied at different universities to get such official letters after their names, don’t worry. We’re here to explain what the most common music file formats mean, the differences between them, and why you should care.

Whether you’re listening to low-quality MP3 files, probably slightly better AAC tracks, or high-resolution audio in FLAC or WAV format, it’s time to figure out exactly what you’re getting and what is the best file format for you. .

Overview of file formats and codecs

Want to get straight to the point? Here is a handy guide to all file formats and the differences between them. If you want to know more, read on below for a more in-depth look at the differences in size, sound quality, and compatibility.

DSD (high resolution): The single bit format used for Super Audio CDs. It comes in 2.8mHz, 5.6mHz, and 11.2mHz, but due to its high-quality codec, it’s (mostly) impractical for streaming. Uncompressed.

FLAC (high resolution): This lossless compression format supports high-resolution sample rates, takes up about half the space of WAV, and stores metadata. It is royalty free and is considered the preferred format for downloading and storing high resolution albums. The downside is that it is not supported by Apple (therefore not compatible with Apple Music).

MP3 (not high resolution): The popular lossy compressed format guarantees a small file size, but far from the best sound quality. Convenient for storing music on smartphones and iPods.

OGG (not in high resolution): Sometimes referred to by his full name, Ogg Vorbis. An open source lossy alternative to MP3 and AAC with no patent restrictions. The file format used (at 320 kbps) in Spotify streaming.

WMA lossless (high resolution): A lossless incarnation of Windows Media Audio, but no longer well supported by smartphones or tablets.

First, let’s talk about the three categories that all audio files can be grouped into. It depends on the degree of data compression (if any) and, therefore, the quality or â€œlossâ€ you will experience as a listener.

If no compression algorithm (or codec) was used to compress the audio in your file, two things happen: no loss of sound quality and, quite quickly, a “startup disk full” warning on your laptop. .

Essentially, an uncompressed track is a reproduction of the original audio file, where real world signals are transformed into digital audio.

WAV and AIFF are arguably the most popular uncompressed audio file formats, both based on PCM (Pulse Code Modulation), which is widely recognized as the simplest audio storage mechanism in the digital world. WAV and AIFF files use similar technology, but store data in a slightly different way. They can store CD quality or high resolution audio files.

WAV was developed by Microsoft and IBM, so it is used in Windows platforms and is the standard format in which all CDs are encoded.

AIFF was developed by Apple as an alternative to WAV, and although they are not as popular, AIFF files have better metadata support, which means you can include album artwork, song titles. songs, etc.

Disadvantage ? These babies are fat. A CD-quality (16-bit, 44.1kHz) file will occupy approximately 10MB of your hard drive per minute.

Everyone loves a FLAC. A lossless file, the FLAC (Free Lossless Audio Codec) is compressed to almost half the size of an uncompressed WAV or AIFF of equivalent sample rate, but there should be no “loss” in terms of of his. FLAC files can also provide up to 32-bit, 96kHz resolution, which is better than CD quality.

Other lossless audio file formats include ALAC (Apple Lossless) and WMA Lossless (Windows Media Audio). The former is a good iOS and iTunes compatible alternative to FLAC, although the files are slightly less compact than FLACs. However, check the compatibility of smartphones and tablets.

Who has heard of an MP3? Course you have. Steve Jobs pulled 1000 out of his pocket on October 23, 2001. It is by far the most common audio format, and MP3s are handy for storing music on portable players or tablets and work on almost any device. reading. But in order to do that, you have to lose a lot of information in the process. In order to make audio files up to ten times smaller than CD quality files, some original data must be deleted, resulting in loss of sound quality.

The bit rate at which an MP3 is recorded also affects the sound quality. MP3s encoded at 128 kbps will experience more sound loss than those encoded at 320 kbps (kilobits per second, where each “bit” is essentially a “piece” of the song). Now that storage is so much cheaper, we would avoid 128kbps at all costs, although 320kbps MP3s are still useful if your storage is limited – and they remain a standard on download stores.

Another lossy format is AAC (Apple’s Advanced Audio Coding) which is compressed much like an MP3, but it is slightly more efficient and sounds better. AAC is used for Apple Music streaming (at 256 kbps) and YouTube streaming.

The Vorbis format, often referred to as Ogg Vorbis because of its Ogg container, (the best way to think of this is that OGG is the can, Vorbis is the ring-pull) is an open source lossy alternative to MP3 and AAC, without restriction by patents. Ogg Vorbis is the file format used (at 320 kbps) in Spotify streaming.

If you stick to the lossy, remember this: while more “bits” usually means better sound, it depends on how efficient the codec is in your file. While you may notice that a lot of the music in your collection is encoded at 128 kbps, so it should be much larger, an MP3 will probably sound a bit (see what we did there?) Worse than ‘an AAC or Ogg Vorbis file, due to the ineffectiveness of the codec in an MP3.

What about high resolution audio?

Unlike high definition video, there is no single universal standard for high resolution audio.

However, in its simplest terms, high resolution audio tends to refer to music files that have a higher sample rate and / or bit depth than CD – which is specified at 16 bit /. 44.1 kHz. High-resolution files therefore come in the form of 16-bit / 96 kHz or 24-bit / 192 kHz, for example.

So why bother? Quite simply, high resolution audio files contain a lot of additional audio information and therefore sound much better than compressed audio formats, which lose information during the compression process. They’ll take up more storage space, but we really think it’s worth it.

Uncompressed files like AIFF and WAV are in high resolution, as are FLAC and ALAC lossless file formats. DSD (the somewhat specialized format used for Super Audio CDs) is also high resolution, but it is not as widely supported. When it comes to streaming, MQA is a file wrapping format used by Tidal Masters, which helps bring high-resolution audio to streaming services using as little bandwidth as possible.

As for high-resolution audio playback, a growing number of products now support it. High-end portable music players such as the award-winning Cowon Plenue D2 and the newer and rather splendid Cowon Plenue D3 support 24-bit / 192kHz WAV, FLAC, ALAC and AIFF files. Both players are also compatible with DSD128 files – and this support is native, so DSD files are not converted to PCM during playback.

The Astell & Kern Kann Alpha and another 2020 award winner, the Astell & Kern A & futura SE200 digital audio players are like many A&K players (including the entry-level A & norma SR25) in that support for files goes up to 32-bit / 384kHz and includes native DSD256 and MQA playback.

KEF’s new LS50 Wireless II speakers play 24-bit / 192kHz files in all their glory, and support for DSD256 is also built in this time, as is MQA decoding for playing compatible downloaded files and music. High resolution Tidal Masters.

High-resolution audio can also be played on most flagship Android smartphones, but you can’t play high-resolution on a new iPhone. We have found ways to get around this, but it’s worth remembering that hi-res audio isn’t as portable as its lossy brethren – yet. You can find more information about hi-fi products that support high resolution audio here.

What is the best audio file format for you?

The file format you choose will depend on the quality of the storage or sound, as well as the devices you intend to use for playback.

MP3s became extremely popular when storage was limited. Now that phones, music players, and laptops have a lot more storage space, we think you should really be looking to use higher quality files than CDs.

If you archive your audio files, a FLAC or other lossless file can be a good cry for ripping your music, however. Lossless files provide a good balance of compression and sound quality, allowing you to enjoy high-quality digital music without taking up all of your storage space. Just make sure your devices are all compatible with the file format you want.