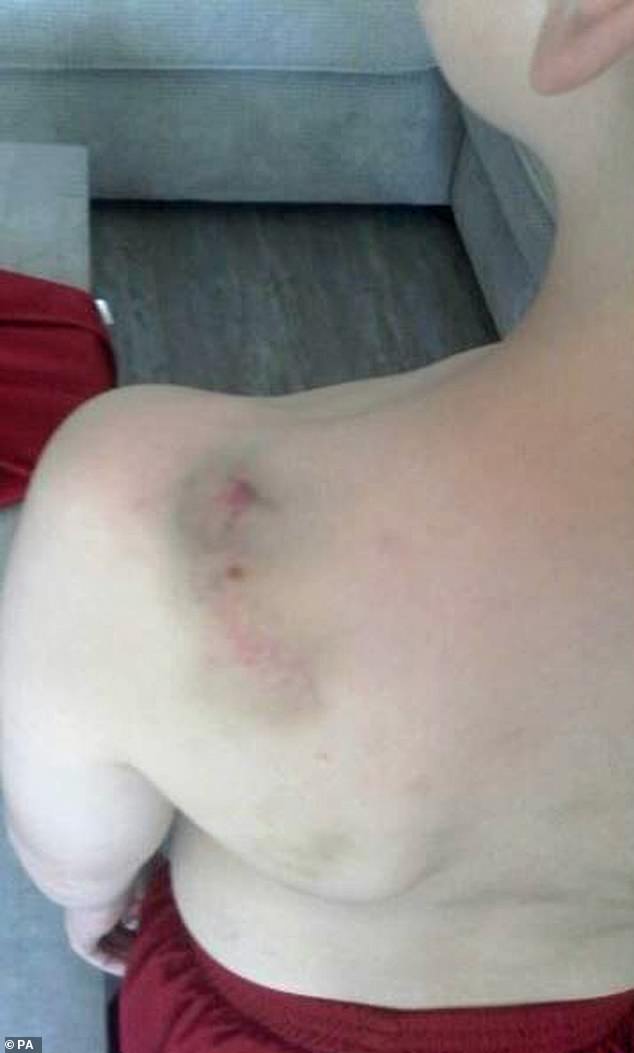 This gruesome photo shows the bruises sustained by a six-year-old boy two months before his death after being “mistreated and beaten to death” by his father and stepmother.

The image was taken by Arthur Labinjo-Hughes’ worried grandmother in a desperate attempt to convince authorities he was in danger.

Joanne Hughes told jurors how she called social services and offered to send the photo, but they “didn’t want to see it.” When the social workers visited the next day, they rated “child’s play” and recorded “no problem”.

One of the social workers later said at the trial that she noticed a “yellowing bruise” in the middle of Arthur’s back during the visit. When she was later shown the photo of Mrs Hughes – which shows a heavy bruise on her left shoulder – she was “shocked” both by the extent of her injuries and by the fact that she did not have any injuries. didn’t realize how serious they were.

Arthur was reportedly killed after suffering systematic abuse that met the “medical definition of child torture” including being deprived of food, forced to stand 14 hours a day and poisoned with salt before being fatally. attack.

His father Thomas Hughes, 29, and stepmother Emma Tustin, 32, deny murdering Arthur at their home near Solihull, West Midlands, in June 2020. They also pleaded not guilty to several counts of cruelty to children.

On Tuesday, jurors viewed CCTV footage of Arthur struggling to move his comforter after being forced to sleep in the living room for the fifth day in a row (Photo: Arthur)

Yesterday, heartbreaking CCTV emerged showing the emaciated youngster, whose pajamas appear to hang from him, wincing in pain as he tries to pick up his blanket and his special Avengers pillow.

In the haunting video, filmed hours earlier on June 16 and shown in court yesterday, the tragic boy is seen struggling to stand before collapsing on the living room floor.

Arthur yells “no one loves me” four times as he struggles to walk across the room while appearing to be limping.

It takes him over two full minutes to get up, pick up his quilt, and walk about two meters to a door leading to another room.

In audio clips released with the West Midlands Police video, played in court today, little Arthur is also heard saying “no one is going to feed me” seven times in 44 seconds.

The court heard that the youth suffered an insurmountable brain injury after being subjected to a campaign of cruelty that amounted to the “medical definition of child torture”.

This included being deprived of food, being forced to stand 14 hours a day and being poisoned with salt, they told jurors.

The tragic Arthur Labinjo-Hughes, six, tries to pick up the quilt from the floor where he slept in CCTV footage shown at Coventry Crown Court on Tuesday

The heartbreaking clip shows an emaciated Arthur Labinjo-Hughes, whose pajamas appear to hang from him, grimaces in pain as he tries to pick up his blanket and pillow 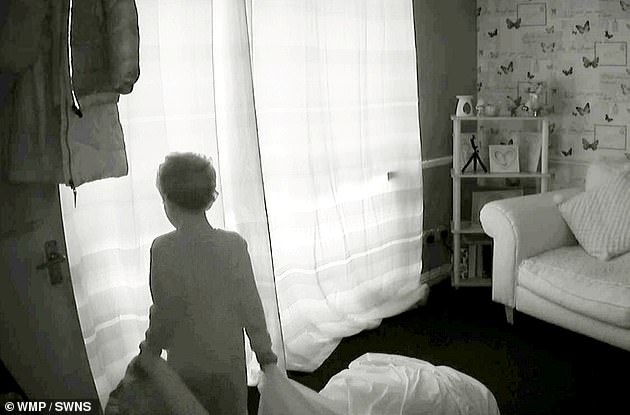 The tragic boy can be heard crying “no one loves me” as he is barely seen able to cross the room.

The audio clips released on Tuesday come after voice notes of Arthur crying sent from Tustin’s phone were important during the trial.

The jury heard that Tustin often texted Hughes within minutes of leaving the house with an audio file of Arthur crying along with text saying words like “start over” or “still in progress” .

The prosecution said Tustin recorded more than 200 voice notes over a three-month period.

Arthur has been heard calling his uncle and grandmother in some of them.

He was also recorded asking for a drink, while in other clips Tustin’s voice could be heard saying “stand still” and giving other similar instructions.

On Tuesday, jurors viewed CCTV footage of Arthur struggling to move his comforter after being forced to sleep in the living room for the fifth day in a row.

In the last hours of Arthur’s life, jurors learned he was so weak and frail he could barely lift the covers when he woke up on the morning of June 16 last year. .

The schoolboy was later killed as a result of having his head hit “repeatedly against a hard surface” at the hands of Tustin, it is alleged.

Arthur’s uncle Blake Hughes told court last month the youngster broke down in tears after claiming Tustin pushed him against a wall and called him “ugly.”

Six-year-old Arthur Labinjo-Hughes has been weakened by months of abuse, salt poisoning and starvation, prosecutors say (pictured with Father Thomas)

He told the court: “He said his mother didn’t love him and had abandoned him.

“Then he started to cry. He went on to say that no one liked him.

Jurors learned how Tustin would send Hughes voice notes of Arthur crying every time he left the house.

Hughes would respond with messages such as “dig Arthur’s grave”, “I’ll take his neck off” and “the kid will understand when I come back”.

He also texted saying he would take his “c ***** g jaw off his shoulders” and told his partner to “put him out with the garbage”.

Earlier this week, Hughes admitted he would also use “pressure points on Arthur’s neck to discipline him” after seeing videos of police brutality in the United States online.

He said he would use those pressure points for “about 10 to 15 seconds” to “help discipline him.”

Prosecutor Jonas Hankin said the couple routinely abused Arthur physically and verbally to cause him “significant harm and suffering.”

The distressing footage was shown to jurors at Coventry Crown Court on Tuesday, where Thomas Hughes, 29, and Emma Tustin (pictured), 32, are accused of killing Arthur at their home in Solihull, West Midlands, in June.

He had previously told the court: “Neither can begin to justify what they did to him. Arthur was a helpless child who depended entirely on them for his well-being.

“Arthur has become the target of derision, abuse and systematic cruelty aimed at causing him great physical and mental suffering for unfathomable reasons.”

Arthur was taken to Birmingham Children’s Hospital and his life support was turned off in intensive care at 1 a.m. on June 17.

Arthur had been in the care of his father after his mother, Olivia Labinjo-Halcrow, was accused of killing her new partner in February 2019.

Hughes met mother-of-four Tustin online before the couple moved in with Arthur to their home near Solihull in the West Midlands when the government put a lockdown due to the coronavirus pandemic.

The trial, which is scheduled to sit today but since adjourned until later in the week, is continuing.