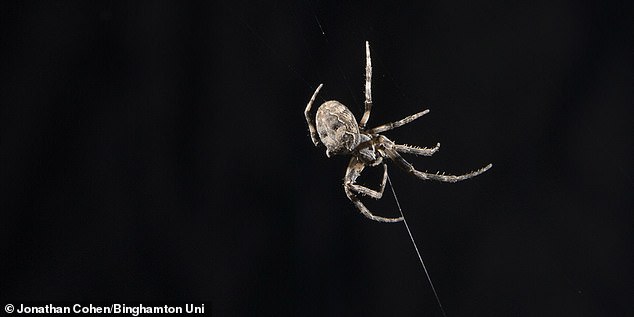 Spider sense! Spiders Use Their Webs Like Giant Hearing Aids To Amplify Audio Vibrations Through Their Legs, Study Finds

By Shivali Best for Mailonline

Spiders use their webs as giant hearing aids to amplify audio vibrations through their legs, a new study has revealed.

Researchers from Binghampton University set out to understand how orb-weaving spiders – the famous species featured in “Charlotte’s Web” – detect sounds.

They found that the spiders used their webs as extended auditory networks to pick up sounds, which then vibrated through their legs.

This technique could give spiders advance warning of the arrival of prey or predators, according to the team.

Spiders use their webs as extended auditory networks to pick up sounds, which are then vibrated through their legs

Spiders depend on the vibrations of the web

Spiders are master builders, deftly weaving strands of silk into intricate 3D webs that serve as the spider’s home and hunting ground.

Spider silk transmits vibrations over a wide range of frequencies so that when plucked, the sound produced contains information about prey or the structural integrity of a web.

Spiders have poor eyesight, so they rely on the vibration of their web’s silk for information, such as their next meal.

They receive information using organs on each of their legs called cleft sensilla.

Spiders can “tune” silk by adjusting the tension and connections to build a better web.

Previous studies have shown that when something vibrates their web, spiders react quickly.

However, in their new study, the team showed for the first time that spiders also turn, crouch or flatten in response to sounds in the air.

The same way we use our eardrums, spiders detect tiny vibrations through sensory organs at the end of their legs.

Orb-weaver spiders are known to make large webs, creating an enormous sound-sensitive surface that is up to 10,000 times larger than the spider itself.

To test the acoustic properties of the web, the researchers asked orb weavers to weave a web inside a frame in a completely soundproof room.

Once the web was built, the researchers broadcast pure sound 9.8 feet (three meters) away, to see if the spiders would react or not.

Amazingly, the team found that the spiders reacted to sound at levels as low as 68 decibels.

They then placed the sound source at a 45 degree angle, to see if this affected the spiders’ behavior, and found that the animals could tell where the sound was coming from with 100% accuracy.

Using lasers, the team confirmed that the web vibrates over a wide range of frequencies.

Professor Ron Miles, who led the study, said: “Of course the real question is if the web is moving like this, does the spider intend to use it.” This is a difficult question to answer.

By squatting and stretching, spiders can change the tension of the web, helping them tune into different frequencies, researchers say.

This suggests that spiders might be able to customize their web to hear certain sounds.

“It’s reasonable to assume that a similar spider on a similar web would react in the same way,” said Prof Miles.

By squatting and stretching, spiders can change the tension of the web, helping them tune into different frequencies, researchers say.

“But we can’t draw any conclusions about that, since we tested a certain type of spider that happens to be quite common.”

As well as improving our understanding of spider behavior, the researchers suggest the findings could aid in the invention of new microphone designs.

‘The spider really is a natural demonstration that this is a viable way to detect sound using viscous forces in the air on thin fibers,’ Prof Miles added.

“If it works in nature, maybe we should take a closer look.”

ARACHNOPHOBIA IS IN OUR DNA

Recent research has affirmed that fear of spiders is a survival trait written into our DNA.

Dating back hundreds of thousands of years, the instinct to avoid arachnids developed as an evolutionary response to a dangerous threat, academics suggest.

This could mean that arachnophobia, one of the most crippling phobias, represents a finely tuned survival instinct.

And it could go back to the beginnings of human evolution in Africa, where spiders with very powerful venom existed millions of years ago.

Study leader Joshua New, from Columbia University in New York, said: “A number of spider species with potent vertebrate-specific venoms populated Africa long before hominoids and have coexisted for tens of millions of years.

“Humans were at an ongoing, unpredictable, and significant risk of encountering highly venomous spiders in their ancestral environments.”