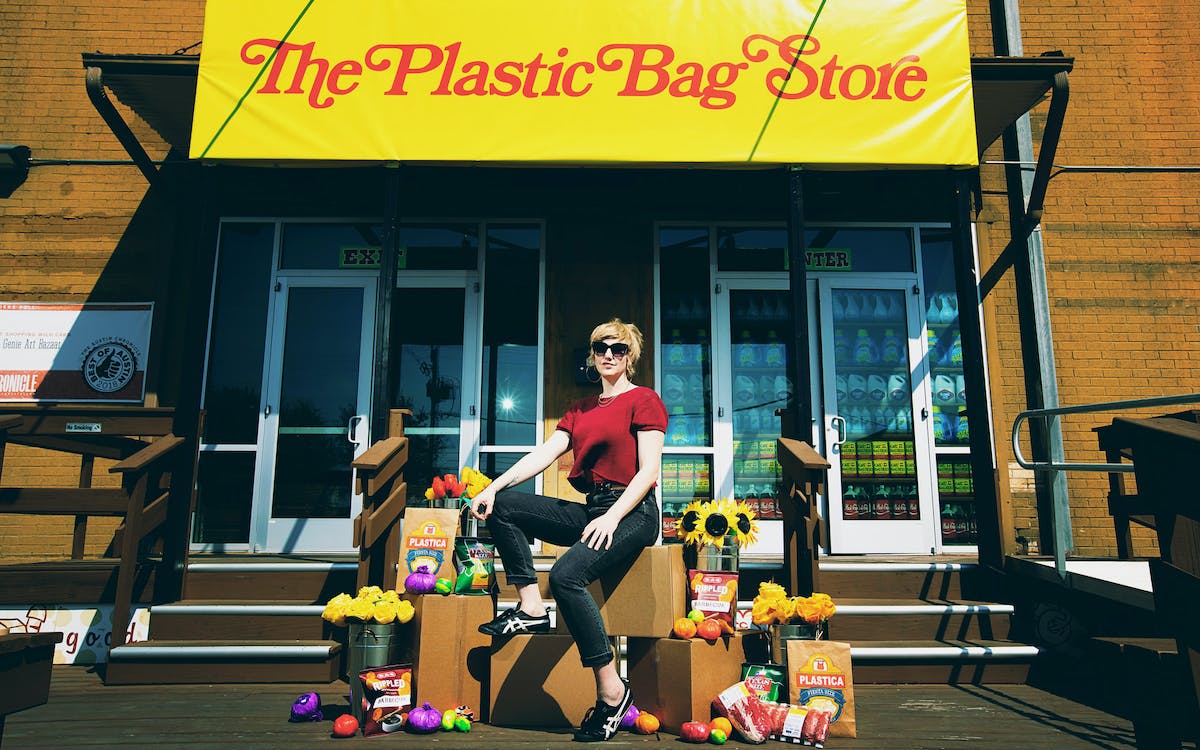 ‘The Plastic Bag Shop’ Is a Sanctuary for Weird, Anti-Consumer Austin – Texas Monthly

Not so long ago, Austin was the Texas capital of farmers markets, hippie soup vendors, anarchist freegans and grocery co-ops. They embodied the anti-consumer spirit prevalent in the city: Many Austin residents once looked askance at big-box stores and food sold layer after layer of plastic. After all, Whole Foods, a grocer dedicated to providing organic and eco-friendly products, was born from this scene. But in the era of Amazon, which now owns Whole Foods, and a proliferation of venture-backed fast-food chains, not to mention locals’ over-enthusiasm for supermarket giant HEB, Austin recently forgot one of the best parts of herself.

It takes an artist to remind us that there are other, more radical ways of thinking about what we eat and how we acquire it. To set foot there The plastic bag store, Robin Frohardt’s unclassifiable mix of multi-piece installation works, puppet theatre, film and immersive performance, is to step into a portal to a less dissociative mode of engagement with our unsustainable era, non-biodegradable and waste prone. Frohardt uses satire, imagination, and the occasional flourish of stunning beauty to invite viewers into a mindset that is both playful and unapologetically critical of our consumer-packed American way of life.

The customer experience begins in a mock supermarket, the titular store, in which all items are hand-carved into single-use plastic bags. Frohardt, whose attention to detail borders on obsession, crafted several hundred intricate garlic bulbs, onions, potatoes, watermelons, endives, lobsters, chicken drumsticks, and more. all from used bags she salvaged. She and her collaborators have also designed and printed boxes, labels and advertisements for satirical counterfeit products like Bagweiser beer, polluted Pacific Gyre bottled water and Yucky Charms breakfast cereal, which fill the shelves with a copy of the packaging. (“The ocean is full of billions of plastic shards. Sea turtles and birds eat them for breakfast. Now you do too!”, with a side of bottle caps). A magazine rack holds, beneath the other glossy papers, the Baggs magazine – “the world’s dirtiest mag bag”. The cumulative effect is that of inhabiting a self-contained, out of whack alternate reality with a tightly repetitive critical focus.

It’s hard to explain where the show came from without spoiling the fun. Suffice it to say, there are other rooms to explore, including a visually alluring cavern topped with bag-handled icicles, and a narrative that propels viewers through spaces and is told primarily through filmed puppets. The history of puppets begins with the ancient invention of single-use disposable water containers, using puppets based on Greek urn characters. The story eventually crosses into the present and ends in the distant future, but not far enough for the plastic waste of our time to decompose. At the end of the show, viewers are invited to reimagine the fake supermarket as some kind of sanctuary in which our civilization, known to distant future generations as the Clients, once practiced a mysterious and exotic religion of consumerism.

The plastic bag store is indeed a kind of sanctuary, but not so much for consumerism as for its opposite. For an Austin cityscape that has lost so many affordable theaters, art studios and otherwise unmaximized for-profit creative spaces in recent years, the project feels like a breath of fresh, uncommercialized air. . It’s fitting, then, that the show’s opening marks the arrival of the first in-person iteration of the Fusebox International Performing Arts Festival since 2019. Fusebox has a long-standing reputation, dating back to 2005, for delivering the best of the arts to Austin. , fun theatre, dance and performing arts from across the country and around the world. It’s served free for about a week every April, with all admissions free. (The plastic bag store sells tickets through April 12 for $15-$25 through Texas Performing Arts, then offers free admission April 13-17 for ticket holders booked through Fusebox.)

Austin is lucky to have Fusebox and get it back despite the recent massive disruptions. Austin’s theater scene — edgy, always inventive but barely professionalized — has experienced the coronavirus pandemic and tech boom like a double whammy, with performance opportunities derailed just as rent and production of shows in town were becoming much more expensive. Still, this year’s Fusebox lineup is typically full of intriguing draws. Local composer Graham Reynolds, who has scored several Richard Linklater films, is about to unveil a cross-border collaboration, called MXTX, with more than forty DJ-producers and composers from Texas and Mexico. The project will culminate in an open-source audio sample album and library as well as a live concert series, which will kick off at Austin’s new Moody Outdoor Amphitheater in Waterloo Park on April 16. Japanese sound artist ASUNA presents a new immersive work composed of a hundred keyboards. Austin artist Michael Anthony Garcia is the guest curator of a visual arts component of Fusebox, a satire of an art fair called “The It’s NOT Fair”, in partnership with eight local galleries. And Austin-based former drag-rock icon CHRISTEENE will play the late-night Hub Festival, alongside a new glam-influenced performance art group, Princess Goes to the Butterfly Museum, led by l actor Michael C. Hall of Dexter and Six feet Under ground Fame.

Frohardt, who is based in New York, says she was first inspired to do The plastic bag store while standing at a supermarket checkout, watching a bag-in-a-bag being stuffed into a bag. His show was scheduled to make its U.S. debut in Times Square on March 18, 2020, but that run was canceled by social distancing rules, and his grocery store sculptures and puppets sat in suspended animation in his fake storefront during several months. Eventually, she decided to film the puppet sequences to facilitate collaboration in the era of the pandemic. When it finally opened in November 2020, it did the New York Times‘ Best Theater of 2020, then toured Los Angeles and Chicago before landing in Austin.

In addition to Fusebox, Texas Performing Arts (TPA) at the University of Texas at Austin has been instrumental in providing The plastic bag store Towards the city. Like Fusebox, TPA has been crippled by the pandemic in its mission to bring cutting-edge theater experiences to Austinites. A few months ago, TPA mounted a traveling production of a Texas-themed show by the Wooster Group, New York’s legendary experimental theater company, to see a company member quarantined following a a positive COVID-19 test. The plastic bag store then feels like a key marker for the performing arts in Austin getting back on track and showing what might be in store for a changing and more expensive but (one would hope) larger arts city.

There is a scene at the beginning The plastic bag storepuppet film where the former inventor of single-use water carafes explains to his mother what to do with them after consuming them. “We throw them away,” he says.

One of the uses of art is to amuse us and distract us from our dilemmas, things that we constantly witness but don’t know what to do. Another use is to clarify these issues, so that we come to see our habitual willful ignorance as a sort of “far away” that is actually a nowhere, a non-solution, avoidant, and illusory. The plastic bag store is a threshold between these two realms in Austin – the here and there, the world of waste and the world of reality, whichever one we start in or think we belong to. It is an opening worth crossing.