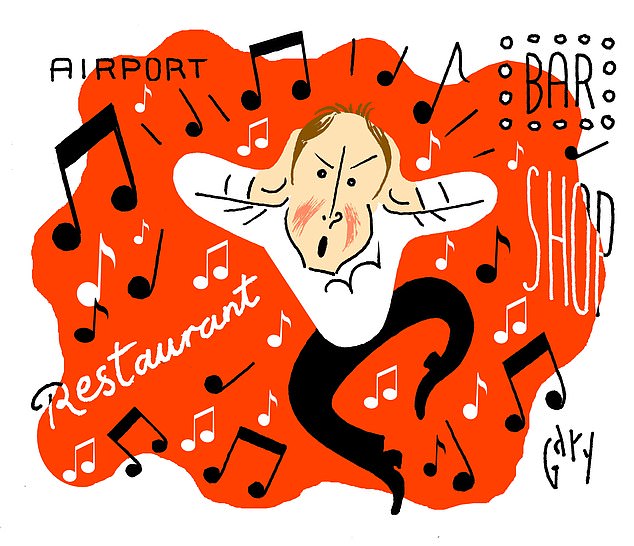 Why do bars and restaurants insist on background music?

The Gore Hotel in London’s South Kensington was a stylish venue in a fashionable part of town, so I had high hopes for my night out with my then French girlfriend.

Must say I had a bit of catching up to do as a few weeks earlier we had been to a pub in Covent Garden and things hadn’t gone well after I made a strong objection to what pop music resounds from its speakers.

In fact, I got into such a rage that I finally got up from my seat and threw the contents of my beer glass over the loudspeaker high on the wall above me.

Of course, I missed, and – instead of merging the thing like I had hoped – all I managed to do was make a mess. And then I was asked to leave, or rather we were, which created a certain coldness between us.

And so you can imagine my annoyance when the first thing I noticed when I walked into Gore’s Bistro One Ninety that night, 30 years ago this month, was that there was also background music at high volume.

“Why are they making this atrocious noise on us? I asked. My companion shook her head, mouthing something I didn’t hear.

As my exasperation grew, her face fell. She could see where the evening was heading and, if past experience was any guide, we’d be lucky to see our tartes tatin.

But I wasn’t just neurotic, we could barely get along. In the end, I was so upset that I approached every other table, asking each group of diners if they too objected to the loud pop music.

I was more than willing to sit down and button my lip if the restaurant was split on the issue, but, for a man (and a woman), they all wanted the noise to blow.

When I put this to the waiter he shrugged, said it was out of his hands and asked if we’d rather sit upstairs in the most expensive restaurant in the hotel.

“You need to channel your energy and stop moaning,” my companion said.

In 1992, at the age of 38, I resolved to launch an official anti-racketeering campaign that welcomed me almost everywhere I went, be it a restaurant, a shop, a GP waiting room

So, so – at the age of 38 – I decided to launch an official anti-racketeering campaign that welcomed me almost everywhere I went, be it a restaurant, a store or the waiting room of GPs, and that night in 1992, Pipedown was born.

After all, I was then, and still am, a non-fiction writer, so I was not lacking in communication skills.

The introduction of the smoking ban has allowed us to shop, eat and drink in a smoke-free environment, so why does uncontrollable and inescapable background music linger in these spaces like cigarette smoke did it before?

Unwanted “muzac” (NB. “Muzak” with a “k” is a trade name these days) easily becomes noise, and noise is the forgotten pollutant. Sometimes you can’t hear yourself think, let alone hear the person you’re with.

You can’t read, you can’t listen to your music with headphones. No, you are trapped, subjected to a terrible cacophony.

And I speak like someone who can hear quite well. But there are 12 million people in the UK with some sort of hearing loss, whether it’s deafness, general hearing loss, tinnitus (hearing a constant ringing, whistling or buzzing sound) , hyperacusis (sensitivity to noise making sounds louder), presbycusis (difficulty distinguishing speech from a noisy background, as in nature documentaries) or misophonia (an intolerance to selective sounds).

People with autism and Asperger’s syndrome, which are not hearing disorders per se, can also be triggered by loud noises.

It is therefore not absurd to qualify it as a pollutant: its trace does not remain in the lungs but on the nerves of those who suffer from it. It’s a real pain in the ear.

Often when I complain, a bar manager or restaurant owner thinks I just don’t like their taste in music. That’s not it at all, I just can’t stand its omnipresence.

It’s the people who love music the most who can’t stand its inappropriate use. Greensleeves, for example, is beautiful music, much like Vivaldi’s Four Seasons, and it doesn’t deserve to be treated like acoustic wallpaper, let alone mangled like music on hold.

One of our earliest supporters was comedian, writer and broadcaster Stephen Fry, who summed up our mission in the slogan: “Running water, piped gas, piped electricity but never piped music!” It’s not a utility and it’s not part of civilized life, as many seem to believe.

So what about my campaign to stop it? Over the past 30 years, our group of muzac-phobes has grown and our collective shushing has earned us high profile scalps, the first being Gatwick Airport.

After harassing their management about horrible, incessant music in terminal lounges in 1994, they agreed to conduct a customer survey. And, surprise, surprise, a majority didn’t like the music: 43%, compared to 34% who liked it, and the rest didn’t care or didn’t notice it. So the airport listened and it’s been quieter since.

M&S is another success, although more intermittent. I’m sure when sales dip some marketing gurus believe the answer is “vibe” until they get mixed reviews and turn the music off again. My local M&S is thankfully quiet and every time I mention it to a cashier, they seem pleased that it’s gone.

Indeed, it is the workers in places infested with music that I pity the most.

We received a lot of correspondence: a woman in a factory was on sick leave for six months because of ghetto blasters at work; a worker at a concession inside Heathrow was plagued by the nearby company’s ‘music at all times’ policy; and the constant noise of a radio in a Royal Mail sorting office drove one person into early retirement.

The problem is simply hellish at Christmas when stores repeat the same festive carol hundreds of times a day.

Another of the biggest complaints we receive is about TV noise. Our inbox should look like the Points Of View mailbag.

Why, oh why, does a cheetah hunting scene in a nature documentary have to be accompanied by a soundtrack of drumbeats?

I once wrote to David Attenborough about this, praising his excellent programs. He said the music was “appropriate”.

Brian Cox is another culprit. I and so many others cannot understand what the physicist is saying, given that his narration is overwhelmed by an orchestra that might as well be playing in your living room.

Complaints from us and others grew so much over Cox’s 2011 series Wonders Of The Universe that the BBC reissued it to reduce its background music.

It was an isolated concession by an otherwise indifferent society. In its centenary, I hope the BBC starts to take older viewers seriously, otherwise it smacks of ageism. I once suggested they invite people over 55 to listen to the programs before they air, so the real public sentiment can be gauged, but they didn’t respond.

Still, at least I can turn off the television – something I couldn’t do when I was immobile in the hospital years ago. Don’t ask what I had, I’m better now, but the worst was the patient’s TV next to me.

After he went to sleep, he continued to play, leaving me staring at the ceiling, wide awake and not at all rested, until a nurse finally arrived and turned him off.

Room TVs should be banned in my opinion and headphones should be mandatory for patients watching theirs in bed.

The issue has been one of our main concerns and now it is getting due attention. A recent article in the British Medical Journal lamented its deleterious effects on patients in what is supposed to be a healing environment.

GP waiting rooms aren’t any better, but the receptionist at my local knows me and turns off the TV when I walk in!

But don’t take me for a cantankerous doter in my village in Wiltshire. I could live alone – after being divorced (but not from my Bistro mate) – with no kids and a Labrador since he died two years ago, but I like to party.

I just have to whistle at my guests as they leave to shut up, not wanting to wake up the neighbors and be labeled a loud hypocrite!

The struggle continues. I don’t know if I can hold the torch of tranquility for another 30 years, but battle after battle I hope we will win the war – one day by achieving peace in our time.